For teh third time in 4 days, Deborah Frisch (Oregon Criminal Offender
#1675174) libels an attorney of the Oregon Minority Lawyer's Association.
This time, Debbie posted teh libel on her blog.

(We have "blue boxed" the original blog, to protect the innocent.) 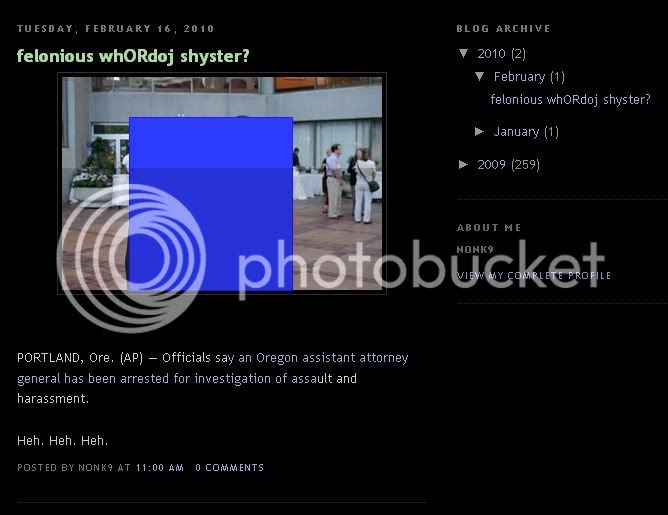 Deborah Frisch got an early start to her harassment habits
this morning. (Of course, since Debbie Frisch is unemployed,
bankrupt, and on food stamps, she has nothing else to do...)

Today, Frisch posted a blog (quickly removed, but preserved
as a screencap) and Facebook entry libeling two lawyers at
the Oregon law firm which is exposing Deb Frisch's stupidity
and holding Frisch responsible for her criminal actions. 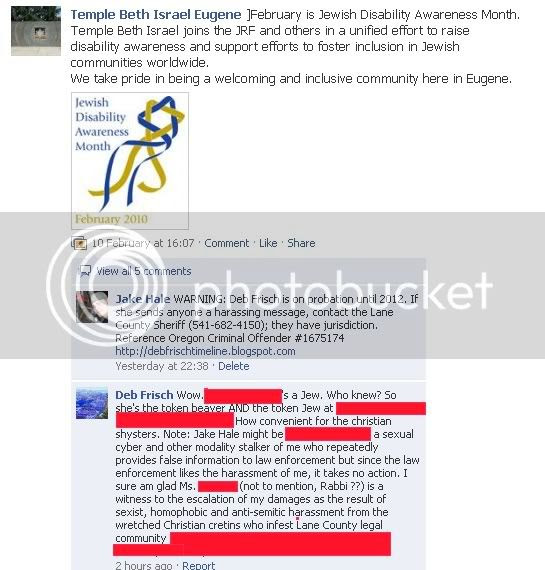 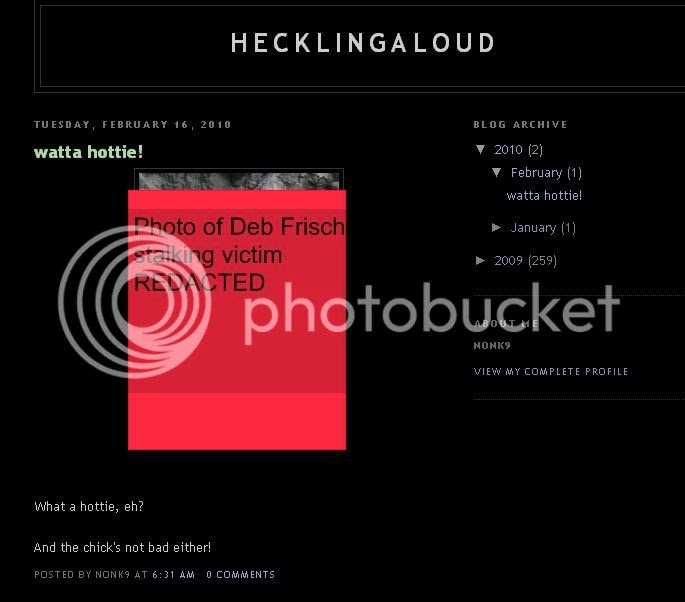 In a repeat of Friday's performance, Deborah Frisch libels a lawyer with the Oregon State Attorney General's Office on Facebook. 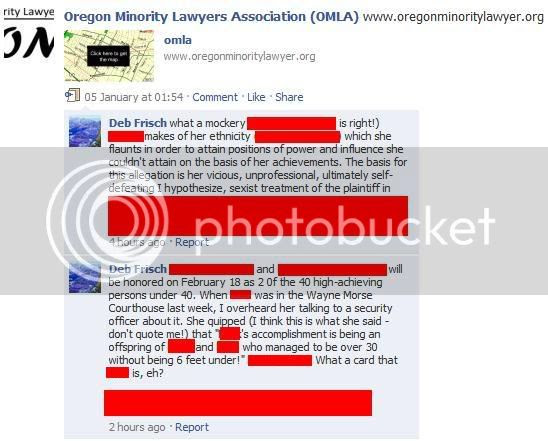 Posted by minteh at 7:12 PM No comments:

After two weeks of getting pwned by professionals of superior
intelligence, unemployed dummy Deborah Frisch takes
out her frothing rage on a Law School's Facebook page...
and libels Oregon's assistant Attorney General, to boot. 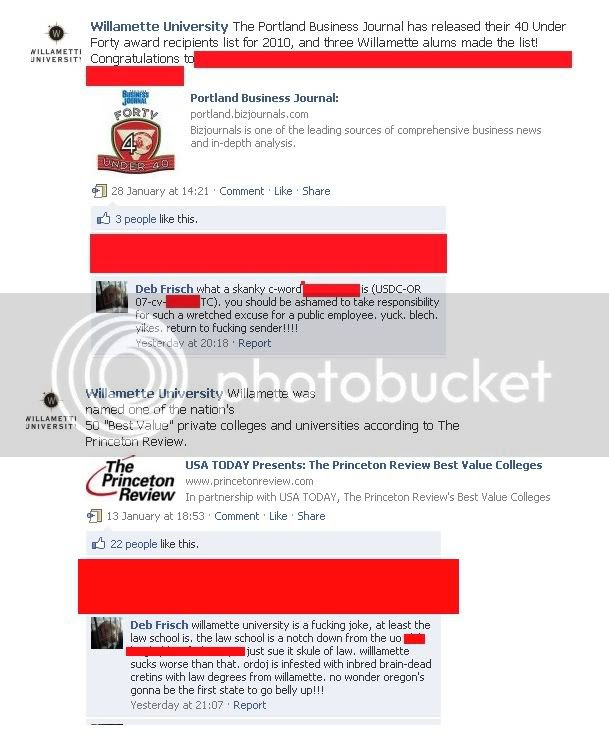 Here is a screencap of a STFU order issued by a federal
judge to Deb Frisch last November. Teh order followed
Frisch's repeated "abusive, insulting, vulgar, and profane"
communications (by email and phone).

Frisch violated the order last month, and got PWNED. 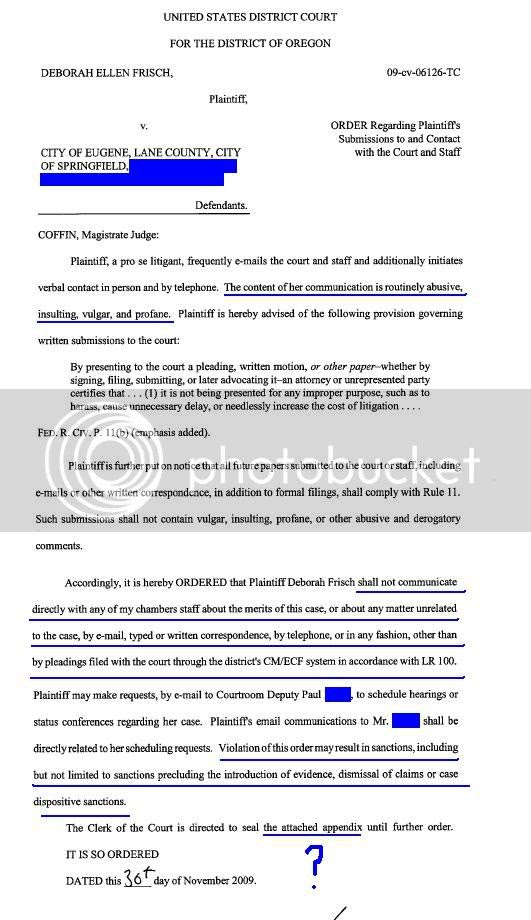 Note it: when Deborah Frisch can't win a battle of wits (which
is pretty much par for teh course), she turns to stalking, libel,
harassment, and vulgarity.

So today's blog, where Deb Frisch libels teh judge overseeing
her frivolous lawsuit, comes as no surprise. Frisch's frivolity
is being dismantled piece by piece in teh federal courts--with
a federal judge dismissing Lane County as a defendant
last week, and federal magistrate Thomas Coffin issuing a rare
STFU Order to dummy deb frisch last month.

Deborah Frisch, humiliated again, is obviously not in good
spirits, as evidenced by the escalation of
her Facebook stalking and harassment habits.

Frisch's blog also reveals that she harassed another federal
judge's office--that of Chief Judge Lasnik on the Federal District
Court of Washington State--in her futile efforts to libel Judge
Coffin.

Amusingly, Frischy pulled down teh blog a few minutes after
posting it--illustrating for the 31,416th time her ignorance of
teh obvious fact:

TEH INTERET IS FOREVER, DEB FRISCH! 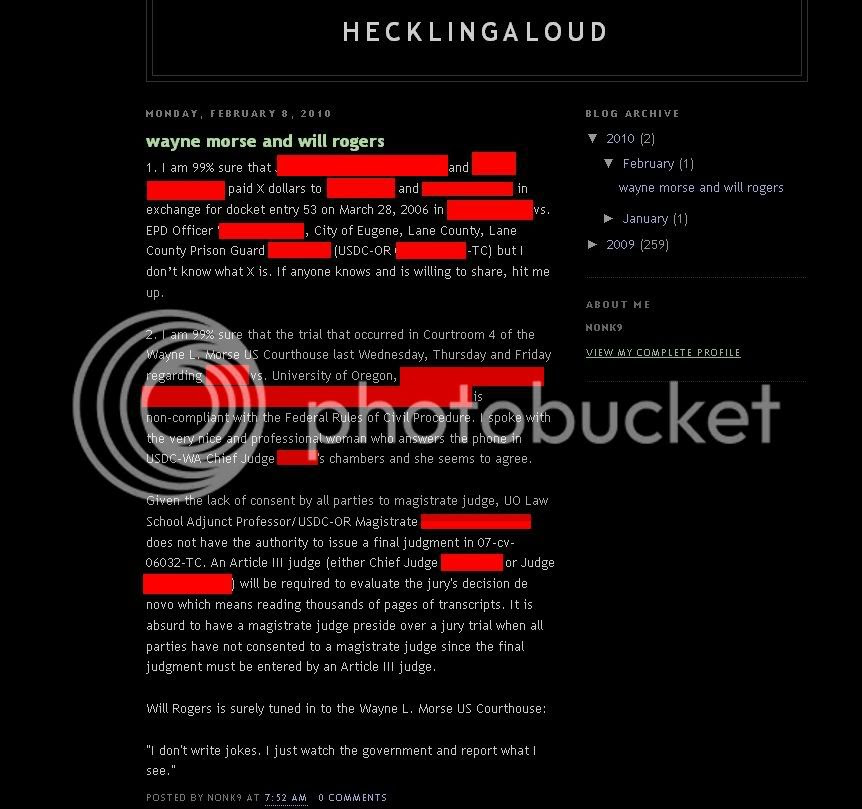 Nice, eh? Of course, Dummy Debbie Frisch has a lifelong habit of hate mail,
as witnessed by this doozy Frisch sent to kunstler.com last year...

how many jews can you fit in a car?
two in the front seat, three in the back and six million in the ashtray.

i told my jewish brother this joke but i have not had the nerve yet to tell my jewish parents.

A half hour later, after the site told her I would post her joke on the Hate Mail page, Deborah Frisch (dfrisch@pobox.com) wrote:

. . . cool - that's why I sent it, you zionofascist nutcase with the social skills of a cordless drill.
you know, jim, i'll be straight with you. people like [REDACTED] and the other techno-nerdy eco[NOMICS]terrorists who created the mess we are in don't just belong behind bars. they belong behind barbed wire. i'll tell you, sometimes i think we threw the lamp out with the lampshade!
make sure you spell my email address right: that's d as in darfur, f as in fallujah, r as in remulac, i as in insane, s as in sunshine, c as in cheerios, h as in hostile AT SIGN pobox.com!

Looks like Dummy Deb Frisch is starting off the month with libel,
stalking and vulgarity...as usual.

In these posts, we find DumDeb:

1) libeling a local attorney--no doubt because attorneys are nowadays
making Deb Frisch look like the imbecile she is... 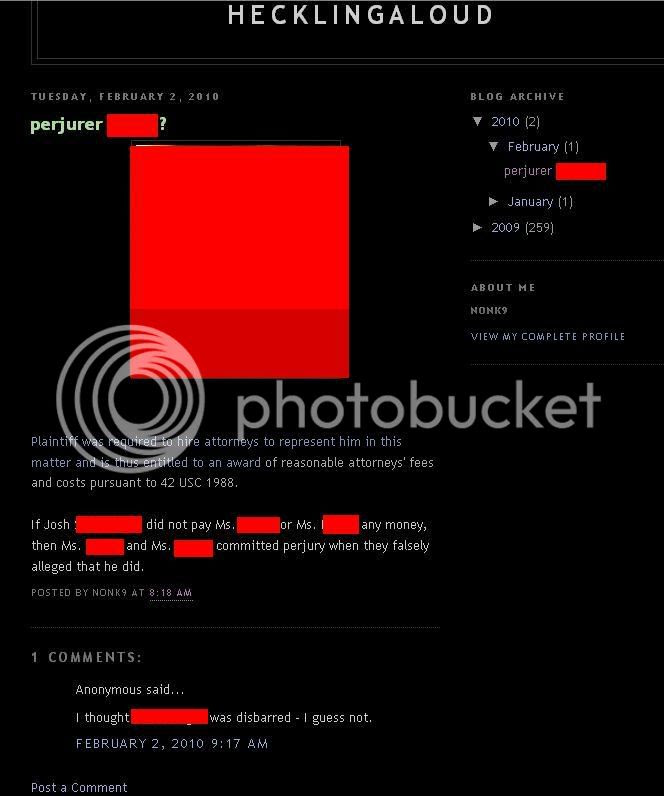 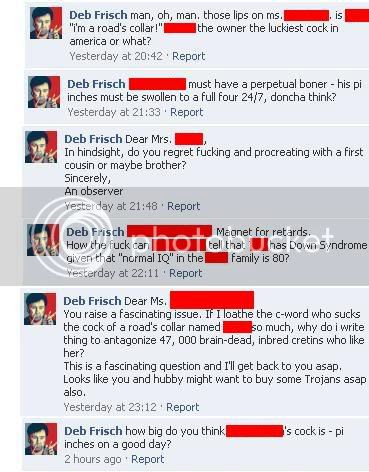 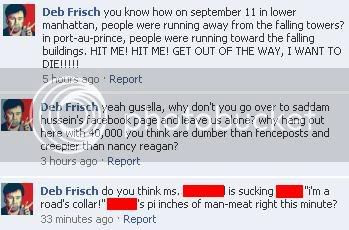