As veteran Debbie-watchers know, Debbie hurls the biggest threats whenever
she's facing the biggest humiliations...last year, for instance, Debbie tried to
derail her criminal trial by threatening her victim, and teh prosecutor who
was holding Deborah Frisch responsible for her violent criminal actions.

All of Debbie's shrieking and bluffing were, needless to say, epic failures.

So, now that Dum-dum Debbie Frisch is facing court $anction$ for hiding
from a mandatory deposition on April 15th, we are not surprised that
Debbie is attempting an impotent EVERYTHING BUT TEH KITCHEN SINK harassment strategy...

Like in today's blogs, where Debbie hurls various toothless threats--including
teh empty threat that she'll send a letter to the Lane County District Attorney.

Debbie forgets that we ALL have Google--so we know that:

1) The Lane County District Attorney recently told Debbie to STFU at a
public meeting where Debbie was stalking him.

2) The Lane County District Attorney oversaw Debbie's criminal conviction
for her violent crimes in 2009--and won an easy conviction.

All of which shows what will happen to Debbie's pathetic letter to teh LCDA:
it will be laughed at, crumpled up, and tossed immediately into the trash bin.

Now, for teh screencaps:

First is teh letter from Lane County's Legal Counsel ordering Deborah Frisch to STFU...or else! (Which shows how pathetic they think Deb Frisch is):


Next are Debbie's pathetic threats to go to teh Lane County DA--
threats which are laughably toothless bluffs:

Posted by minteh at 3:33 PM No comments:

Like a stuck pig, Deborah Frisch squeals the loudest when she's
stabbed the hardest.

Now that Dummy Debbie is facing $anction$ for hiding from a
deposition--typical behavior for the cowardice behind Debbie's bullying
and bluster--Debbie is desperate to evade teh consequences for her
attempt to illegally avoid cross-examination.

Just take a gander at today's blogs, where Deb Frisch reveals
she's harassed three witnesses to teh "dodged deposition"
--including some telephonic harassment of a Eugene Police officer!

Vulgar language abounded in Debbie's communications by phone,
Facebook, and on her libelous blog.

Debbie also sent two of her empty TORT CLAIMS NOTICE!!1
threats. (As everyone with access to Google knows, Deborah
Frisch's TORT CLAIMS NOTICES!!1 are impotent bluffs. Put
simply: Debbie lacks the money to file any NEW lawsuits. And the
judge overseeing the frivolous lawsuit DumDeb has already
DENIED Debbie's desperate attempt to add new defendants
to her idiotic suit...laughing off Debbie's attempts as "FRIVOLOUS
and FUTILE."

Will Debbie face even MOAR sanctions for her obvious attempts
to harass witnesses in teh civil lolsuit? Time will tell. . . In any case,
Debbie's twitchy moves expose her realization just how quickly teh
ground is crumbling beneath her.

Posted by minteh at 3:27 PM No comments:

On April 15th, 2010, Deborah Frisch reneged on an agreement to be
deposed, in connection with her frivolous lawsuit against teh City of
Eugene. Here's a transcript of Teh Record of Debbie's cowardly evasion
of cross-examination.

It looks like Deb Frisch will soon reap what she's sewn. Yesterday,
attorneys for defendants filed to slap sanctions on Debbie--including
a $515.00 bill for teh time of people staffed to cover teh deposition.

In a Motion to smackdown Debbie Frisch with sanctions,
filed in Federal Court today, teh City of Eugene filed a 23-page
"Declaration," stuffed with vile emails Dummy Deb Frisch
sent to lawyers in teh case--as well as federal court staff.
(Debbie has been repeatedly warned by teh judge that,
if she persists in sending vulgar emails to court staff, she
could face "sanctions...including dismissal of [her frivolous]
claims," lol)

Teh emails (including such words as "cock," "tits," "shlong,"
"schmuck" and "humping," and a thinly-veiled reference to
oral sex) illustrate Debbie's mentally impotent strategery:
When confronted by superior intellects, Deborah
Frisch's only recourse is limp-lobed bullying,
vulgarity, vileness, libel and harassment.

But once Debbie is hit with teh $515.00 bill by teh Court,
perhaps DumDeb will begin to realize that her actions have
consequences.

Here are screencaps of Little Miss Debbie's emails. In brief,

Posted by minteh at 5:03 PM No comments: 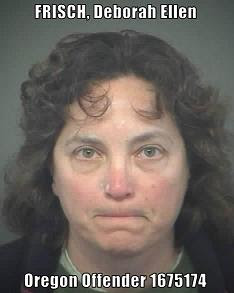 Debbie hates it when people stand up to her bullying. (Just two
weeks ago, Debbie went ballistic when she was blocked from a
entering a dance, lol.)

Hence today's harassing blog posts, which stalk a federal judge's
clerk and two people who stood up to Debbie's bullying, in the past.

The other won a restraining order and criminal charges against
Deborah Frisch for stalking and harassment. (Deb Frisch served
a year's probation, 2006-07, in connection with her harassment,
in that case.)

Posted by minteh at 6:27 PM No comments:

As everyone has noticed, Deborah Frisch is quick to accuse others of
her own gaping faults.

Of course, Debbie must think everyone's forgotten about her sexual
comments about a 2-year-old, which cost Teh Deb her job in 2006.
(Miss Debbie is still, unsurprisingly, unemployed.) Deb Frisch persisted
in posting sexual fantasies about children, which led her ISP to yank
her website the following year.

Posted by minteh at 9:58 AM No comments:

Deborah Frisch, posting as "heckler," impotently rages about her thwarted
attempt to enter an April 10 dance (in violation of her probation). Other
readers quickly unmask Debbie and mock her, lol.

In today's blog, Dummy Deb Frisch continues to double-down on her
stoopidity.

Last Saturday, Frisch, attempting to violate her probation by entering
a drinking establishment, had a vile, violent temper-tantrum which
spilled over into her blog.

Now, Dumdeb is harassing teh Springfield Chief of Police about a police
officer who took a report on Frisch's harassment of the bouncer who
denied Debbie entry to teh dance. (Frisch directly harassed various
acquaintances of teh bouncer via Facebook and other means.)

Amusingly, Debbie thinks teh Springfield Police have short memories.
A mere 18 months ago, it was a Springfield Police officer who took a
Domestic Violence Report on Debbie, after she assaulted a woman...
This, of course, led to Debbie's being put on probation until 2012.

Posted by minteh at 7:30 AM No comments:

Unless something's changed, Dodo Deborah Frisch is scheduled to be
deposed tomorrow, in connection with a frivolous lolsuit she's filed
against the City of Eugene.

The guts of the suit concern Frisch's behavior after she left teh John
Henry bar and grill in downtown Eugene, on November 2, 2008.

Now, teh funny thing about lawsuits is...all SORTS of lulzy paperwork
gets filed. Like this here email, written by a Eugene police officer,
recalling Debbie's being "visibly intoxicated" to the point where she
"used [her] vehicle for support."

Frisch also tried to lie to police; but in Debbie's inebriated state, teh
lie was so lame that cops sniffed out teh bullshit right away ("This
did not sound right.")

Also amusing is teh last highlighted sentence, where Debbie admits
defeat: "Frisch agreed to let the female drive her home and,
I quote, Frisch stating 'Thank you, officer, I believe that
this was the best way to handle this tonight'"

Of course, once home, Debbie "thanked" that female by assaulting
her--which led to Debbie's criminal conviction in March of last year.
And teh terms of Debbie' s probation, in turn, were at teh heart of
Debbie's being refused entry at a bar/danceclub last Saturday.

So, in a roundabout way, Debbie's criminal behavior of Nov. 2 2008
still stings even today. Of course, since Debbie hates being held
responsible for her actions, that's gotta hurt. LOL.

Today, Miss Debbie posted teh text of one of her toothless "Tort Claims
Notices" on her blog (see below). So let's wawk through TEH FACTS:

1) Little Miss Debbie, jobless since 2006, is DEAD BROKE, and thus
lacks the money for a filing fee (as Frisch recorded in this document,
begging teh court to waive the fee)

4) Funny that Debbie would CC the Springfield Chief of Police...since
one of their officers interviewed a victim of Frisch in November 2008.

5) Funny, too, that Debbie mentions the Lane County District Attorney
--since he's the one who oversaw Debbie's criminal conviction for assaulting a
victim in 2008. The DA also humiliated Debbie at a Feb. 1 public meeting,
when Frisch tried to stalk him.

6) Debbie also claims that she "voluntarily left" teh Hot Flash Dance when
--since teh terms of Debbie's probation don't allow her to enter drinking
establishments. But an EYEWITNESS describes Debbie's behavior, um,
a bit moar colorfully:

Deborah Frisch engaged in "nearly violent behavior and her onslaught of
vulgarities and hate-mouthing of the dance organizer and the owner of
The City Nightclub, which continued for well over 5 minutes. It was the
most indecent and offensive behavior I've ever witnessed. I have to say
the owner and the manager maintained incredible restraint after being
attacked so viciously. I couldn't even get in the door with her big mouth
and arms flailing about. Her face was beet red and she looked as if she
would have an aneurysm at any moment.

And here's Debbie spewing on Facebook, moar of the same...

For teh second time in a year (that we know of), police have recorded a complaint detailing Deborah Frisch in harassing/stalking behavior...Teh incident is connected to Miss Debbie's attempt to trespass on a Dance on Saturday night...

Teh report is reminiscent of an August 2009 incident, in which police recorded Frisch posting a death threat fantasy on her blog...

Deborah Frisch HATES it when people stand up to her bullying.

Hence today's blog, which follows the Eugene Hot Flash
Dance's denying Frisch entry to their dance--on teh solid
grounds that, since Debbie is on probation until 2012, she's
not allowed to enter drinking establishments.

For our part, we offer hearty support to peeps strong enough
to confront a bully and say...SUCK IT, DEBBIE FRISCH!!

Deborah Frisch, who is forbidden from entering drinking establishments
until 2012 under the terms of her probation, had a temper tantrum on
the Facebook pages of Hot Flash Dance organizers this weekend.

Alert organizers remembered Debbie is forbidden by her probation
from entering bars; so they astutely denied Teh Deb entry to an
April 10 Hot Flash Dance, being held at The City Nightclub.

Debbie did not take teh rejection well, lol. Teh following day, Miss Debbie
continued harassing and libeling dance organizers--until one of them filed
a police report and told Debbie to STFU or face criminal charges for harassment
(...again).

Posted by minteh at 5:48 PM No comments:

After a 2-week hiatus, Deborah Frisch returns her unemployable
azz to libeling and harassing people with jobs. In blogs posted this
weekend, Debbie reveals that she falsely accused a victim of sexual
harassment (in reality, it's Deb Frisch who lost her job for sexually
threatening a 2-year-old). Frisch also threatens to send a victim one
of Debbie's toothless "Tort Claims Notices" (in reality, lawyers laugh
their asses off at Debbie's impotent "Tort Claims Notices").

Posted by minteh at 2:33 PM No comments: