Today, Miss Debbie posted teh text of one of her toothless "Tort Claims
Notices" on her blog (see below). So let's wawk through TEH FACTS:

1) Little Miss Debbie, jobless since 2006, is DEAD BROKE, and thus
lacks the money for a filing fee (as Frisch recorded in this document,
begging teh court to waive the fee)

4) Funny that Debbie would CC the Springfield Chief of Police...since
one of their officers interviewed a victim of Frisch in November 2008.

5) Funny, too, that Debbie mentions the Lane County District Attorney
--since he's the one who oversaw Debbie's criminal conviction for assaulting a
victim in 2008. The DA also humiliated Debbie at a Feb. 1 public meeting,
when Frisch tried to stalk him.

6) Debbie also claims that she "voluntarily left" teh Hot Flash Dance when
--since teh terms of Debbie's probation don't allow her to enter drinking
establishments. But an EYEWITNESS describes Debbie's behavior, um,
a bit moar colorfully:

Deborah Frisch engaged in "nearly violent behavior and her onslaught of
vulgarities and hate-mouthing of the dance organizer and the owner of
The City Nightclub, which continued for well over 5 minutes. It was the
most indecent and offensive behavior I've ever witnessed. I have to say
the owner and the manager maintained incredible restraint after being
attacked so viciously. I couldn't even get in the door with her big mouth
and arms flailing about. Her face was beet red and she looked as if she
would have an aneurysm at any moment. 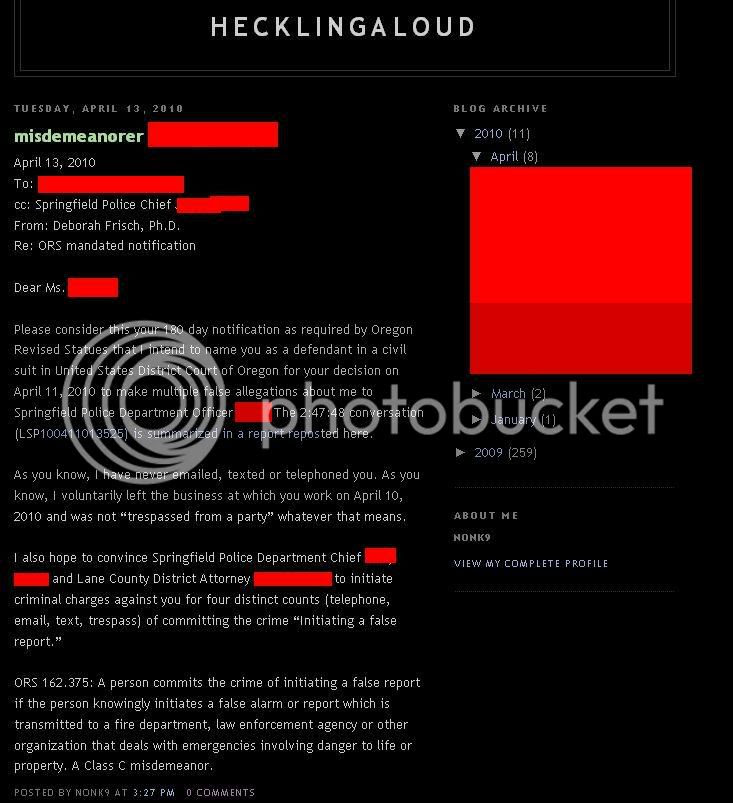 And here's Debbie spewing on Facebook, moar of the same... 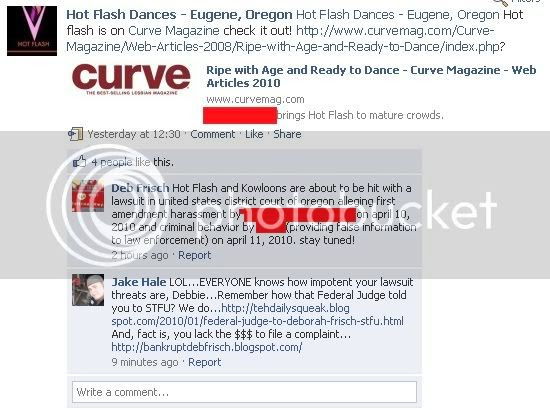