Unless something's changed, Dodo Deborah Frisch is scheduled to be
deposed tomorrow, in connection with a frivolous lolsuit she's filed
against the City of Eugene.

The guts of the suit concern Frisch's behavior after she left teh John
Henry bar and grill in downtown Eugene, on November 2, 2008.

Now, teh funny thing about lawsuits is...all SORTS of lulzy paperwork
gets filed. Like this here email, written by a Eugene police officer,
recalling Debbie's being "visibly intoxicated" to the point where she
"used [her] vehicle for support."

Frisch also tried to lie to police; but in Debbie's inebriated state, teh
lie was so lame that cops sniffed out teh bullshit right away ("This
did not sound right.")

Also amusing is teh last highlighted sentence, where Debbie admits
defeat: "Frisch agreed to let the female drive her home and,
I quote, Frisch stating 'Thank you, officer, I believe that
this was the best way to handle this tonight'"

Of course, once home, Debbie "thanked" that female by assaulting
her--which led to Debbie's criminal conviction in March of last year.
And teh terms of Debbie' s probation, in turn, were at teh heart of
Debbie's being refused entry at a bar/danceclub last Saturday.

So, in a roundabout way, Debbie's criminal behavior of Nov. 2 2008
still stings even today. Of course, since Debbie hates being held
responsible for her actions, that's gotta hurt. LOL. 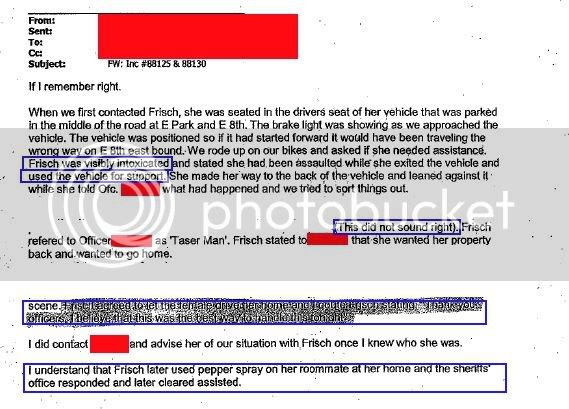