Back in her old form, Oregon Criminal 1675174 Debbie Frisch returns to her habit of TOOTHLESS LAWSUIT threats...

Debbie wants to sue because of a thread on EJMR that truthfully describes Debbie's arrests and imprisonment for stalking, harassment, menacing, etc. etc. etc. Oh, and a transcript of a threatening phone call she made in February of last year. 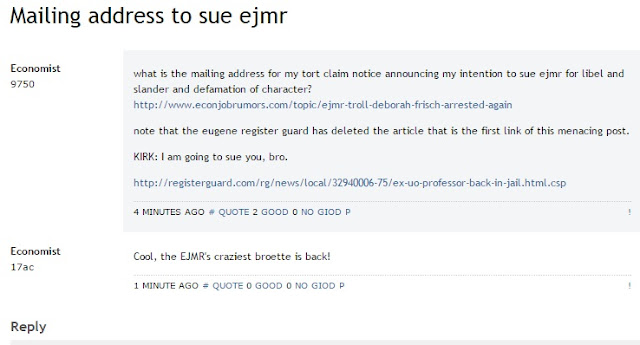 Of course, Dummy Deb Frisch is LYING through her teeth, as usual. The Eugene Register-Guard didn't "delete" the story about her arrest--they ARCHIVED it behind a pay wall. Big difference. A screencap of the original story can be seen here...

Also, this description of Debbie's mathematical stupidity and psychosis is described well by an EJMR regular:


Deb's been posting irregularly on EJMR for at least a couple years. She understands very little economic theory, and can barely reason mathematically, but will nonetheless post at length about what's wrong with economics. What distinguishes her from most clueless lay commentators on EJMR is how vehemently she will attack anyone who she thinks disagrees with her. She will call posters or mods a variety of vile racist, sexist, and homophobic slurs; she will spam new threads once her threads have been deleted; and she will accuse her perceived opponents of being child molesters, rapists, and wife beaters; of having committed fraud against the government; of having gay affairs with each other; etc.
She claimed to have disproved Rabin's calibration theorem, but when posters tried to discuss specifics with her, it turned out that she understood almost none of Rabin's work. For example, she insisted once that she had discovered a function that mapped the first column to the second column in Table 2 of Rabin (2000) and that this function was inconsistent with Rabin's theorem---even though it should have been obvious to any reader that the table was only a list of examples.
It's not easy to come up with examples of Deb's more recent posts. Mods have made it a point to delete them for a while now.
Posted by minteh at 3:00 AM