UPDATE (7/10): As usual, Debbie fumes to read the truth about herself. Screencap of a Debbie Screencap on Facebook: 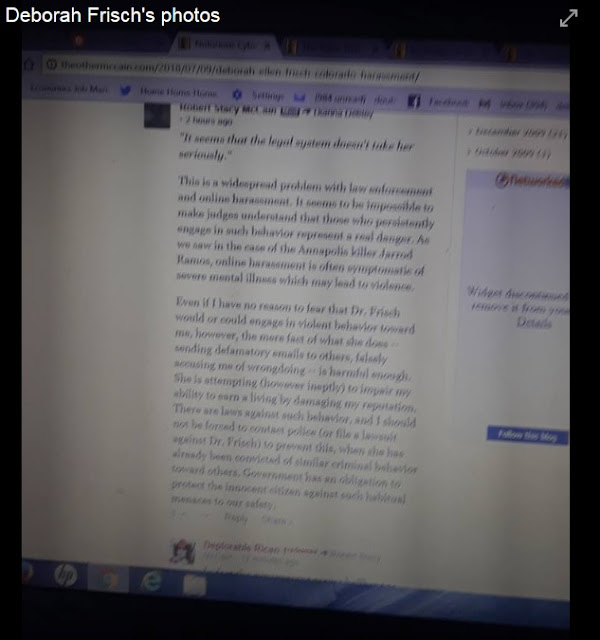 The Other McCain reports this recent nugget:

After about four months in a Colorado jail, Dr. Frisch was reportedly transferred to psychiatric care last month and then, for some unfathomable reason, turned loose. It appears she immediately got back on the Internet and resumed her harassing behavior, including an email to me (CC’d to 18 other people) accusing me of “a hate crime inciting violence” against her.

To this I replied to the entire CC’d list:

To Whom It May Concern:
Deborah Frisch is a mentally ill criminal who, to my knowledge, is currently out on bond while awaiting [sentencing] on [felony] charges in Colorado.
Her communications with you are part of a pattern of harassing behavior that has gone on for a dozen years. In 2006, Frisch lost her job as an adjunct instructor at the University of Arizona as a result of her harassment of blogger Jeff Goldstein and his family. Since then, Frisch has repeatedly had incidents that landed her in trouble with the law. Last year, while wanted on warrants in Colorado, Frisch fled to Oregon, where she was arrested in January.
Frisch’s mental illness seems to involve a sort of psychological reversal (similar to what what psychologists have called DARVO) in which she imagines that she is the victim of wrongdoing, rather than the perpetrator.
It goes without saying that Frisch’s slanders of me and others are false, and may constitute violation of her bond conditions. Obviously, I have never incited violence against Frisch. I am BCC’ing this message to someone who may be able to report her harassing behavior to the proper authorities.
My apologies to anyone inconvenienced by Frisch’s behavior. She hates me because I’ve occasionally reported on her harassment of Goldstein and others. She has apparently emailed you in an attempt to garner sympathy for herself, and CC’d me in an effort to cause me emotional distress.
Sincerely,
Robert Stacy McCain

Hat Tip:  Notorious Cyberstalker Deborah Frisch Is Out of Jail, and Cyberstalking Again (Other McCain)
Posted by minteh at 11:30 PM