Well, three years of unemployment is bound to bleed a person's bank account dry. So no surprise that Debbie Frisch would blog that she went on food stamps in April... 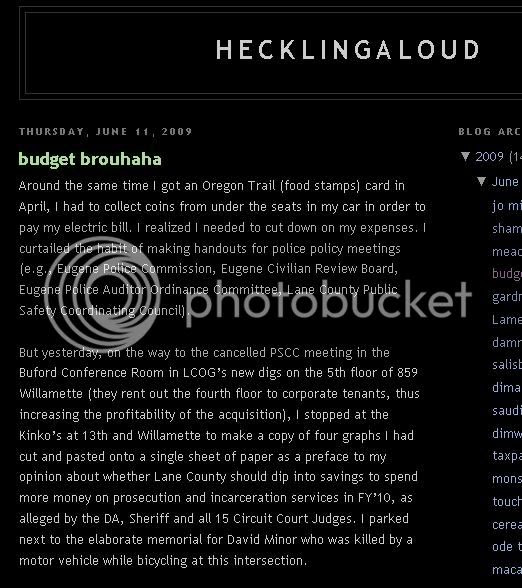 It gets better. On June 8th, Teh Deb also described how she begged for money from some poor guy:

At Saturday Market on May 23, 2009 (a week or two after I revised the Oregon poem into an Oregon/Utah poem), this guy started talking to me and made a comment about some theatrical antics I had engaged in last year at the Wayne Morse Free Speech Plaza. Although he obviously remembered me, I had no recollection of him.

“Ah. I remember you now. How could I forget talking to a guy named Utah?”

I saw Utah again on May 30, 2009. I was lamenting my lack of a cash flow when he said “If you can say something that offends me, I’ll pay you $5.” This was a no-brainer for me since even if I failed, I’d have a lot of fun. I gave it my best shot which as you know, is pretty darn good but I failed. Every nasty thing I’d say, he’d say “That doesn’t offend me. I totally agree.”

“Hey, Utah” I said. “I really need money. I don’t think I can offend you. Would you pay me $5 if I said something so sweet it made tears run down your cheeks?”

He glared at me.

“What if I wrote a poem just for you, Utah."

I made up a little poem that went something like this.

If you have not seen Utah
They you don’t understand
That Utah is the greatest
One in all the land.

Utah handed me five one dollar bills. “Don’t come back again today and if you come back next Saturday, don’t try to bum money from me again.” I nodded and left with my five dollars.

She quickly pulled down the above post--perhaps realizing how obviously needy
and pawthetic she looked...
Posted by minteh at 9:14 AM