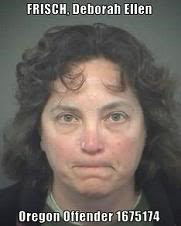 Looks like pedophile Deborah Frisch is at it again...

News surfaced today that Debbie threatened a candidate
and his daughters at the Old Federal Building (211 E. 7th Ave)
in Eugene.

"spewed expletives at [the victim's young] daughters and ...made slang references to the female body part...beginning with a "C" and ending with "NT" [and] used the "F" word numerous times."

At first, teh victim didn't realize Debbie's identity. Only when
Frisch stupidly emailed teh victim (second screencap below), and impersonated a Lane
County employee, did teh victim put 2 and 2 together...

Of course, this is hardly new for Moron Deb Frisch, who lost her
job in 2006 after hurling similar sexual and death threats toward
a child over teh internet. Since then, Frisch has had two criminal
convictions for stalking, threatening, harassment and assault (in
2006 and 2009).

As Debbie's October 25th probation-violation hearing approaches
(for teh terms of Frisch's 3-year probation sentence, see here),
teh list of her vile and violent crimes just gets longer and longer--
along with teh jail sentence Debbie can expect to reap...