Here is teh FULL TEXT of today's COURT ORDER banning
Deborah Frisch from any federal courthouse in Oregon...

By order filed May 10,2010 (dkt. #166). I ordered Ms. Frisch to show
cause why I should not limit to her access to federal courthouses in the
District of Oregon. I directed Ms. Frisch to specifically address: emails
sent from her coyotemind@gmail.com email account between May 7
and May 10, 2010 and her harassment of jurors and attorneys involved
in court proceedings. Ms. Frisch filed a response May 11,2010. (Dkt. #167).

Ms. Frisch denies that her behavior toward court staff while in the intake
area of the Eugene courthouse clerk's office was abusive or disruptive.
She admits that she "exercised poor judgment" the emails she sent
between May 7 and May 10, 2010, and claims that her telephone
conversations with court staff during that same period were "professional,
pleasant, and not abusive." (Dkt. # 167 at 3-4). Ms. Frisch appears to
assert that her contact with a juror after a June 2009 trial was justified
as part of her investigation into the bias that she alleges tainted the trial.
(Id. at 5). She claims that she learned of the defense attorney in the
February 2010 trial "from reading the pleadings in the case for months
prior to the trial at the ... free PACER terminal." (Id. at 5). Ms. Frisch
includes, as an exhibit, a letter from the Oregon Attorney General's
special counsel, which Ms. Frisch believes establishes that her conduct
towards the defense attorney was not harassment. (Id. at 5-6). Finally,
Ms. Frisch denies attending court staff's personal events, claiming
the only events she attended were public. (Id. at 6). Ms. Frisch requests
that I direct Eugene Division Manager [REDACTED] to negotiate a
"mutually acceptable agreement regarding plaintiffs interactions
with clerk's office staff." (Id. at 7).

Ms. Frisch did not limit her response to the document
filed on May 11, 2010. She also responded by telephoning
court staff, including various court employees in the Portland
courthouse. Ms. Frisch made rude and abusive statements
to court employees during these phone calls. She also
responded by sending numerous emails to court staff which
addressed aspects of my order to show cause. The emails
were abusive, rude, and, in some cases, vulgar and profane.
In many cases, the emails threatened that if court employees did not
take certain actions, Ms. Frisch would engage in some unwanted behavior.
For example, in an email sent to a court employee from Ms. Frisch's
coyotemind@gmail.com account at 5: 10 PM on May 11, 2010, Ms.
Frisch stated "If I am forced to revisit this issue, I will be forced to document
your pattern [of behavior] and speculate on the reasons you choose [to behave
this way]." Ms. Frisch sent an email from her coyotemind@gmail.com
address at 5 :00 AM on May 12,2010 to court staff and others in the
Oregon legal conununity stating that it would probably be necessary
for her to again contact the juror from the June 2009 trial to ascertain
whether this juror consented to being mentioned in my order to show cause.
This same email alleged that I used private and personal emails between
Ms. Frisch and court staff as the basis for my order to show cause.

I find that in her response to the order to show cause, Ms. Frisch
admits that her behavior is inappropriate, but does not indicate that
she is willing to curtail her abusive behavior. I find that Ms. Frisch's
suggestion that Eugene Division Manager [REDACTED] negotiate a
communication agreement is not an option. Previously, I amended
my order blocking Ms. Frisch's email to allow her to email [REDACTED]
so long as the communications were professional and related to Ms.
Frisch's case. (Dkt. # 131). Ms. Frisch was unable to comply with
this restriction. It is unfair to continue to disrupt the work of court
employees in an effort to accomodate Ms. Frisch.

I find that Ms. Frisch's latest barrage of emails and
telephone calls to court staff-from May 7,2010 through
the present, illustrates Ms. Frisch's disruptive behavior.
[fn. 1 Many of Ms. Frisch's emails are attached to this order as
sealed exhibit 1, which is available to any court reviewing this
order. All of the emails sent from Ms. Frisch are not included
because there are simply too many. Ms. Frisch has sent
well over 40 emails to court staff] Court staff should not be
subjected to numerous emails as a result of this court entering
an order to manage its docket. To be clear to Ms. Frisch, none
of her contacts with court staff are personal contacts. Court staff
must interact with Ms. Frisch in a civil manner as part of their
employment. This is one of the reasons that Ms. Frisch's
continued abusive behavior toward court staff is so
disturbing and disruptive to court business. I find that
Ms. Frisch's threats that she will act in a certain way unless court
staff comply with her wishes is disruptive to court business.
[fn. 2 For example, in a previous email sent January
6, 2010, Ms. Frisch forwarded an email that she had
sent to numerous recipients accusing a court employee
of engaging in oral sex with the defense counsel on this
matter. Ms. Frisch stated that she would "abort" this
email thread if court staff called her to let her know
when she could pick up an item at the intake counter.
A copy of this email is attached as sealed exhibit 2 to
this order.] Moreover, several of Ms. Frisch's latest emails have
been sent directly to my law clerk, which is in violation of my
November 30, 2009 order (dkt. # 92), which ordered that Ms.
Frisch shall not communicate directly with any of my chambers
staff about the merits of this case, or about any matter unrelated
to the case, by email...or in any fashion." (Dkt. #92 at 2). In short,
Ms. Frisch's emails and telephone calls serve no other
purpose other than to harass court employees. Furthermore,
by communicating directly with chambers staff, she is engaging in
ex parte contact on matters concerning the merits of her case.

Finally, even after being ordered to show cause why I should not
limit her access to the District of Oregon courthouses, Ms. Frisch
has continued her disruptive behavior inside the Eugene Courthouse.
Ms. Frisch was rude to the Court Security Officers (CSO's) when she
entered the Eugene Courthouse on May 14,2010. Ms. Frisch
continued her expletive-laden barrage as she exited the courthouse.
[fn. 3 A report of Ms. Frisch's behavior is attached to this order as
exhibit 3, with names redacted in order to protect the privacy
interests of the targets of Ms. Frisch's abuse. [SEE BELOW FOR
LULZy SCREENCAP!!1]]

I have previously warned Ms. Frisch that her behavior could result
in sanctions. (Dkt. #92). When Ms. Frisch continued to send vulgar
and profane emails, I blocked her email from the court's gateway,
but still did not sanction Ms. Frisch. (Dkt. # 116). In an effort to
accommodate Ms. Frisch, I amended the order blocking her email
to allow her to contact [REDACTED]. (Dkt.#131). Yet, Ms. Frisch's
abusive behavior toward court staff continues. This leaves me
no choice but to sanction Ms. Frisch by limiting her
access to the US District courthouses in Oregon-this
includes the courthouses in Eugene, Medford, Portland,
and Pendelton.

This sanction is narrowly tailored to allow Ms. Frisch to proceed
with her litigation, but to protect court staff from Ms. Frisch's
continued abuse. DeLong, 912 F2d at 1147. Ms. Frisch is admonished
that she shall not directly contact any member of my chambers staff
in any fashion. The only exception is that she may contact my
courtroom deputy [REDACTED] by telephone to discuss matters
directly relating to this litigation in a civil and professional manner.
Ms. Frisch is further admonished that she shall not to send emails
to or make telephone calls to other District of Oregon court employees,
unless these emails are directly related to business before the court
and are conducted in a civil and professional manner. Ms. Frisch
is warned that failure to obey this order may result in
further sanctions, including contempt proceedings.

I take no pleasure in sanctioning this pro se litigant; however, Ms.
Frisch's continued abusive and disruptive behavior leaves me no
choice. The orderly administration of justice must be afforded the
greater priority. Court staff, CSO's, attorneys, and jurors must be
allowed to perform their important work without having to endure
such hostile and obscenity-laced retaliation.

ORDER
It is ordered that: (I) Ms. Frisch shall only be allowed
to enter the courthouse for proceedings in the above
captioned case; (2) when she comes to the courthouse,
Ms. Frisch is required to state the purpose of her visit
to a Court Security Officer (CSO) and; (3) a CSO will
accompany Ms. Frisch to the courtroom where her
proceeding is taking place and will escort her out of
the courthouse when her proceeding ends. If Ms.
Frisch needs to enter the Eugene Courthouse for any
other reason she must send a written request through
the United States Mail to my chambers for my
consideration.

IT IS SO ORDERED 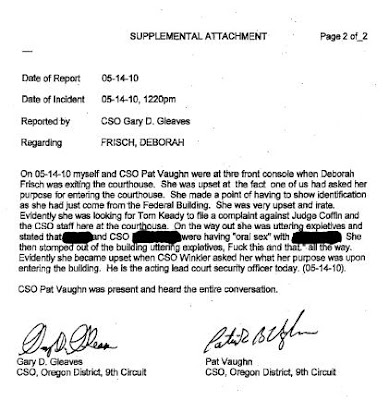