One of Debbie's criminal thought patterns is her pathological lying about the past. Take this nugget from today: 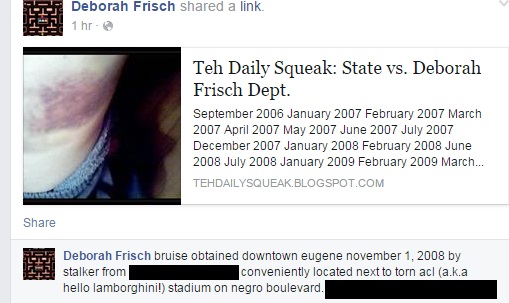 Unfortunately for Debbie, there's this thing called "google," which quickly shows the REAL reason
Debbie got that bruise...

FRISCH WAS BAR-HOPPING, STUMBLING DRUNK, ON NIGHT SHE ASSAULTED ACQUAINTANCE
Eugene (Feb 13)--New details have emerged in accounts
of Miss Debbie's criminal activities on the fateful night of
Nov. 1 2008. The accounts, coupled with earlier information,
tell of a harrowingly batfrisch crayzee night. Small wonder
that Frisch now faces criminal charges, in a trial scheduled
to begin on March 4th.

It has been learned:

Such facts bode ill for Frisch's attempt to defend against charges of physical harassment and reckless use of pepper spray. As usual, we find ourselves pitying Debbie's put-upon public defender...