UPDATE (9/26/2016): Debbie's butthurt that she can't harass and threaten the blogger on his blog. LOL 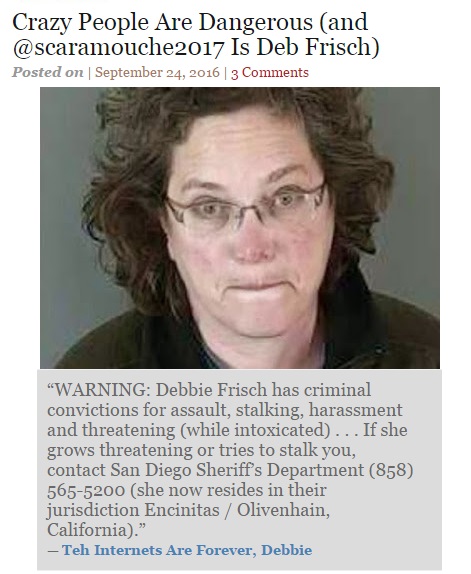 From The Other McCain...

When last we took notice of Deborah Frisch, Ph.D., the former psychology professor had been arrested again, shortly after her March 2015 release from jail in Eugene, Oregon, on charges of making a false police report. For those who don’t remember, Dr. Frisch is the moonbat whose online harassment of Protein Wisdom blogger Jeff Goldstein in 2006 got her fired from the University of Arizona. One of the terms of her 2015 conviction in Oregon was that Dr. Frisch “must complete a mental health evaluation,” and I’m sure we’d all love to see that report, if it ever becomes part of the public record.
Dr. Frisch has reportedly moved to San Diego County, California, in the past year, and I’d forgotten all about her until she decided to CC me on a series of weird emails she sent Friday, making false accusations against Instapundit and PJMedia. Why did she CC me? I don’t know, but considering that 12 other people were CC’d on Dr. Frisch’s email, and given the potentially injurious nature of her false claims, I felt obliged to reply, CCing to all, informing them of who Dr. Frisch is[...]
Now you might suppose that, after I had thus undermined whatever credibility she might have had with the dozen CC’d recipients of her email, Dr. Frisch would have desisted from her harassment...but...


Crazy People Are Dangerous (and @scaramouche2017 Is Deb Frisch)