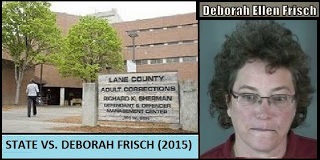 Hmmmm...so Debbie is butthurt over some judge's talk on August 31, 2015? I wonder what happened on that day...

Oh, right. Debbie got HELD ACCOUNTABLE FOR HER CRIMINAL BEHAVIOR ON THAT DAY!

Hey Debbie, it's pretty simple: if you want to stop being arrested and jailed, STOP STALKING, HARASSING, THREATENING AND MENACING people!