UPDATE 8/3/2016: Yes, Debbie is still shitting herself that Lane County is laughing at her toothless threats of a lawsuit... Witness today's "enemies list" (yawn!) 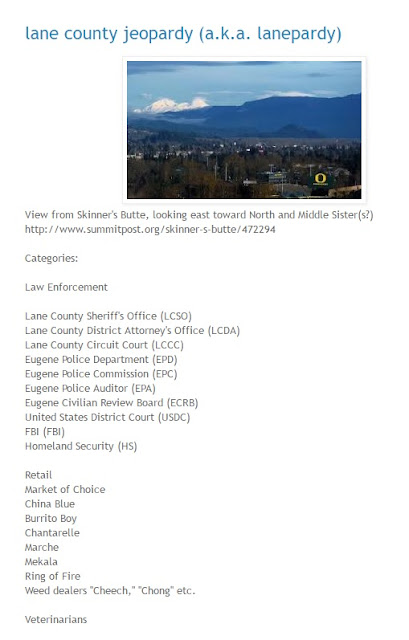 UPDATE 7/20/2016: Yes, Debbie, we see you too... Maybe if you stopped obsessing over
everyone who's LOLing at your stupidity, you'd stop ending up in so much criminal trouble! 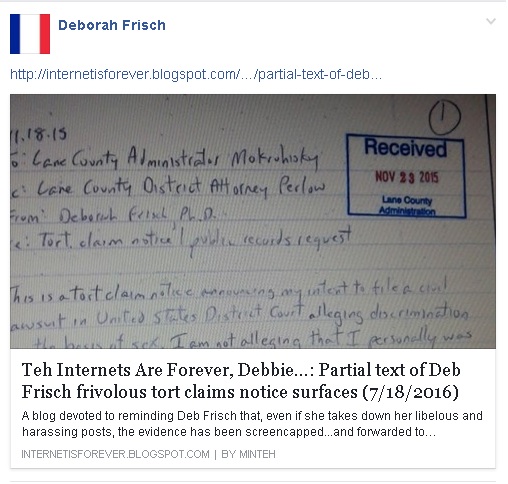 In case you wondered what kind of bullshit Debbie Frisch was slinging in her
recently-mocked Toothless Tort Claims Notice, well here ya go...

Note: Law enforcement authorities LOLed at Debbie's toothless and frivolous
tort claims notice. Miss Debbie remained behind bars for an additional 3+
weeks until she was kicked to the curb (and kicked out of Oregon LOL) on
11 December 2015.

"This is a tort claim notice announcing my intent to file a civil
lawsuit in United States District Court alleging discrimination on
the basis of sex. I am not alleging that I personally was mistreated
by specific deputies. In fact, I have nothing but respect and
gratitude toward the deputies I've interacted with in the 160 days
I've spent in jail. Rather, my allegation is that the policy of the
Lane County Sheriff's Office to allocate a [portion] of beds to
female inmates that is higher than the [portion] of inmates booked
who are female is discriminatory and disadvantageous to women. 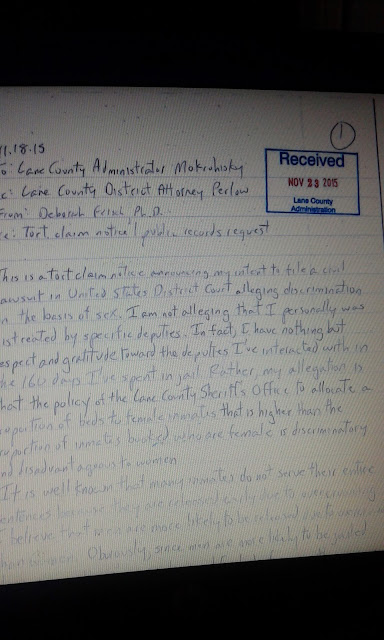