LOL, Remember when Debbie Frisch thought she'd get a Hummer from her LOLSUIT? (8/9/2016)

Pretty funny stuff coming from the fetid piehole of Deb Frisch on Facebook...

She's predicting that somehow her TOOTHLESS TORT CLAIMS NOTICES and FRIVOLOUS LOLSUITS will somehow pay off, so that she can buy an Audi SUV. (Looks like dummy Deb Frisch, who claims to be an expert in "Decision Theory," missed that lecture on "counting chickens before they hatch.")

Hey Debbie, remember how, 10 years ago, you said the same thing about your LOLSUIT threats against Fox News? Didja ever buy that Hummer? (Nope in fact, the lawyers at Fox News LOL'd and your threat, telling you to "Serve Us"...which you didn't.) Have ANY of your legal threats ever made you a single penny? (Nope, in fact, real lawyers LAUGH at your legal stoopidity...) 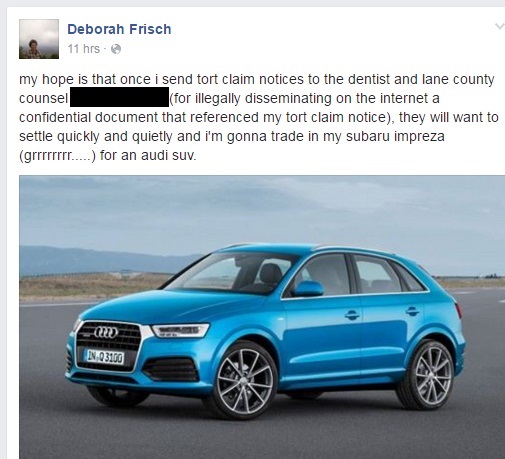